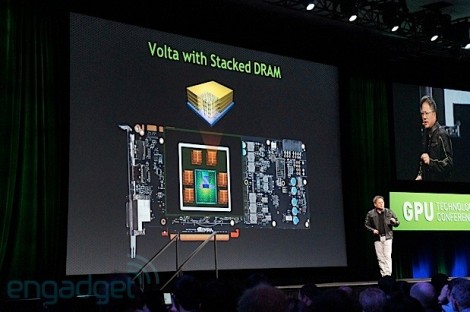 We’re here at NVIDIA’s GPU Technology Conference in San Jose, and company CEO Jen Hsun-Huang has just revealed the next step in its GPU roadmap.

Called Volta, it’s scheduled to arrive after Maxwell, and will advance GPU technology with a ridiculous amount of memory bandwidth. Volta GPUs will have access to up to 1TB per second of bandwidth by stacking the DRAM on top of the GPU itself, with a silica substrate between them. Then, by cutting a hole through the silicon and connecting each layer it’s possible to move, according to Huang “all of the data from a full Blu-Ray disc through the chip in 1/50th of a second.”

We aren’t exactly sure what that means for graphics, but being able to process data that quickly is bound to be a boon for gamers… whenever Volta actually arrives, of course.