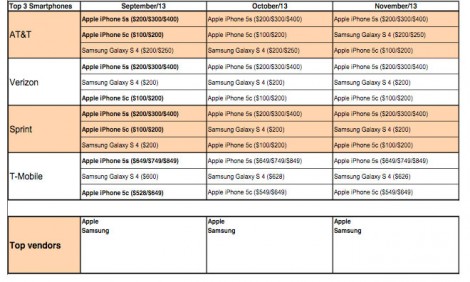 Apple continues to dominate smartphone sales with their flagship iPhone 5s and mid-range iPhone 5c as the handsets took two of the top three sales slots at every major U.S. wireless carrier for the third month in a row.

The Cupertino, Calif.-based company remained America’s top smartphone vendor in November on the back of ‘strong’ iPhone 5s sales and ‘steady’ iPhone 5c sales, according to data cited by Canaccord Genuity analyst T. Michael Walkley in a Thursday note to investors. Samsung notched a second-place finish in an industry that has seen major sales consolidation throughout the fourth quarter.

Before the iPhone 5s and 5c’s release, Apple, Samsung, HTC, Nokia, Sony, and Motorola all had handsets enjoying top-three sales at at least one of America’s big four carriers. Apple’s September announcement pushed all but Samsung out of the picture and relegated the South Korean conglomerate’s Galaxy S4 to the runner-up position across the board.