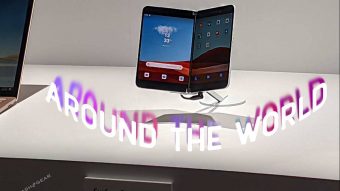 Starting in “early 2021,” Microsoft will be making the Surface Duo available for sale in Canada, the United Kingdom, France, and Germany. This was the plan in part back in November of 2020 for the UK, Canada, and Japan.

In September of 2020, the first reviews of the Surface Duo were in. They weren’t particularly fantastic. It felt like the Surface Duo was a stopgap before the truly usable version came in 2021… with 5G. This first version was released before it made a lot of sense to deliver more than 4G LTE.

The first exploratory photos showed the device as an elegant piece of industrial design, if nothing else. Our first look suggested Microsoft’s initial success would be all about the impressions this device would make from afar.

As of October of 2020, Microsoft made the Surface Duo $200 cheaper than it was at launch. The good news for early buyers in that case was that they’d be able to get a slight refund so long as they were within a 60-day window – which would allow them to return their device and buy a new device for that slightly cheaper price.