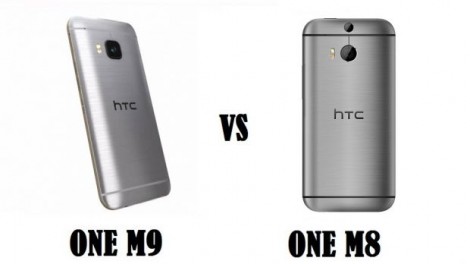 Here are some preliminary impressions about the two smartphones.

Let’s face it, HTC hasn’t done anything too revolutionary with the design of the new phone. Know how the One M8 looks like? Well then you have a pretty good image of what the One M9 is all about.

But those who have an eye for details might notice a few changes here and there. For example, the power button has been moved to live on the right side of the phone, as opposed to the M8 who had it on the top edge.

The new comer takes advantage of a dual finish design (on a full metal body) which in our opinion makes it look more aesthetically pleasing. But we’re yet to see how it translates into real-life usage.

Oddly enough, the new handset is a tad lighter than the One M8, coming at 157 g which constitutes a 3 g difference.

In the screen department nothing notable has changed, so HTC’s presentation of the One M9 didn’t linger on it that much.

Basically we have the same as with the One M8, which means a 5-inch display with 1080 x 1920 pixel resolution. Which is a debatable move.

Manufacturers like Huawei mention that we actually don’t need 2K resolutions on smartphones, as the human eye finds it hard to distinguish what comes over 300ppi.

On top of that 2K displays end up putting an unnecessary toll on battery life and all just to make the phone sound good on paper. However, major tech makers like Samsung are adopting 2K panels with their latest flagship, the Galaxy S6 which is due later tonight.

So, given the fact that HTC kept the same standard on the One M9, the phone should provide good viewing angles and decent outdoor visibility like its predecessor.

The HTC One M9 is the third phone to go live with the Qualcomm Snapdragon 810 on the inside. The chip works hand in hand with the Adreno 430 GPU and 3GB of RAM.

We hope Qualcomm managed to eradicate the overheating problems inside its latest octa-core chip, which have made the Snapdragon 810 highly notorious as of late.

At the other end, the One M8 was based on a quad-core Qualcomm Snapdragon 801 SoC clocked at 2.3GHz fitted with 2GB of RAM and Adreno 330 GPU.

In theory, the One M9 should be snappier and more capable of aptly maintaining all activities onboard. Both models are offered with 32GB of internal storage (and a microSD that gives the ability to expand).

Since the One M9 is based on the new HTC Sense 7.0 which is based on Android 5.0 Lollipop, it’s natural that the company has slipped in a bunch of new features.

Sense 7.0 is not radically distinct from Sense 6.0 but there are some changes to be taken into account. For starters, the new UI adds customizable themes and contextual suggestions in the lock theme. On top of that users also get a new dynamically changing smart launcher.

It’s a natural progression and HTC enthusiasts will probably enjoy the new feel.

HTC has done away with the 4MP Ultrapixel camera which was donning the One M8’s front last year. However, the snapper didn’t get much love from users.

But this year HTC strikes back with a 20MP main shooter which will probably satisfy the needs of the most avid smartphone photographer. The frontal one, however, remains of the UltraPixel variety.

On top of delivering a capable camera to the One M9, which is said to be able to shoot in glorious detail, HTC also added a bunch of cool photo effects which overshadow the ones present in Sense 6.0.

HTC hasn’t said anything about the official pricing of the new flagship at the presentation, but a recent lea indicates the handset will go on sale for $649 / €579.