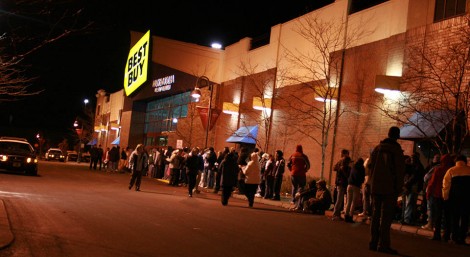 Finally! It’s the time of year once more when Americans line up outside of major retail outlets at absurdly early hours in an effort to score the lowest prices on all manner of consumer goods. Looking for a washer/dryer on the cheap?

How about a Samsung Galaxy Note 4? Or how about a new TV for Aunt Linda? She could probably use a new TV. Black Friday — and, increasingly, the days and weeks surrounding it — may be your best chance at finding a great deal. And you probably don’t have to leave the house!

Let’s start with the modern definition: “Black Friday” is the day immediately following the Thanksgiving Day holiday in the United States, which falls on the fourth Thursday of November. It’s a non-official kickoff day for the holiday shopping season, alongside shopping mall Santas and “All I Want For Christmas Is You” playing on repeat.

Many employers give workers the day off, as it falls between Thanksgiving Day and the weekend. Not retailers, though — it’s a huge day for holiday sales, if not the biggest, and many retailers open extra early and have timed discounts rolling throughout the day.

Now that we’re all on the same page about what actually happens on Black Friday and when it happens, what in the world does that name mean? There are quite a few inaccuracies surrounding this, so let’s start with a few places that the modern use of “Black Friday” didn’t come from: sales records going from red ink (losses) to black ink (profits), a stock market scam in 1869 (that did happen, though), employees calling in sick the day after Thanksgiving to have a four-day weekend, the American slave trade. Thankfully, the truth is far more interesting.

“Every ‘Black Friday,’ no traffic policeman was permitted to take the day off. The division was placed on 12 tours of duty, and even the police band was ordered to Center City. It was not unusual to see a trombone player directing traffic.”

That excerpt is from The Philadelphia Inquirer, written by long-time Philadelphia Police beat reporter Joseph Barrett. The piece’s headline? “This Friday Was Black With Traffic”, a reference to the term that Philadelphia police officers used in describing the day after Thanksgiving. They called it “Black Friday,” because of the massive traffic jam that they dealt with all day due to shoppers, and then all night due to the Army-Navy football game.

WHAT IS BLACK FRIDAY NOWADAYS?

That depends on your perspective. Is it a nightmare race to commercialism embodied by “leaked” advertisements and YouTube videos of shoppers pepper-spraying other shoppers? Or maybe it’s a convenient opportunity to pick up holiday gifts on the cheap(ish)? Or could it just be a chance to spend time with your Aunt Linda, who loves a bargain? But then you end up in a Bed, Bath and Beyond at 6AM, eating Slim Jims for breakfast, second-guessing your very existence. Anyway.

What we really mean to say here is that Black Friday has changed. The internet, as it does, fundamentally altered the concept of Black Friday forever. It used to be a day where people lined up very early in the morning (or even the night before) in order to be one of the first into the store, wherein limited quantities of heavily discounted products would be up for sale. While that still occurs, online retail sales increase dramatically every year. This year’s projection for online (desktop and mobile) retail sales in November and December in the US? According to comScore: $61 billion, which is a near 20 percent increase from last year. Those sales make up approximately 10 percent of all holiday sales.

Beyond the ease of purchasing online rather than going to a store in person, shopping online during Black Friday in recent years has become a numbers game. You can often find identical deals in store and online — you’re betting that you’re quick enough online to snag one before it’s too late, rather than going to the store in person and seeing that competition firsthand. Is it more likely that your local store has fewer people vying for the same discounted item? Do you care enough to bother?

Lining up for Black Friday sales very early in the morning has its benefits. With so many retailers offerings similar discounts on the same day, many distinguish themselves with “doorbuster” deals. Not only do these deals reward the people who are very first in line with time- and/or stock-limited discounts on especially in-demand items, but they also serve to entice consumers into that particular store. It’s a similar profit model to how Walmart works: Sell some items at a loss so that customers buy other items while in the store. “While I’m here buying a heavily discounted toaster for mom, I’ll pick up a few scarves for myself and that TV for Aunt Linda and maybe a few blouses too.”

The term “doorbuster” was reportedly coined by J.C. Penney in a 1949 advertisement, according to First Mention. He assuredly didn’t intend for that term to become literal, which it unfortunately did at a New York Walmart store in 2008.

“By 4:55, with no police officers in sight, the crowd of more than 2,000 had become a rabble, and could be held back no longer. Fists banged and shoulders pressed on the sliding-glass double doors, which bowed in with the weight of the assault. Six to 10 workers inside tried to push back, but it was hopeless,” The New York Times reported in November 2008. “Suddenly, witnesses and the police said, the doors shattered, and the shrieking mob surged through in a blind rush for holiday bargains. One worker, Jdimytai Damour, 34, was thrown back onto the black linoleum tiles and trampled in the stampede that streamed over and around him.”