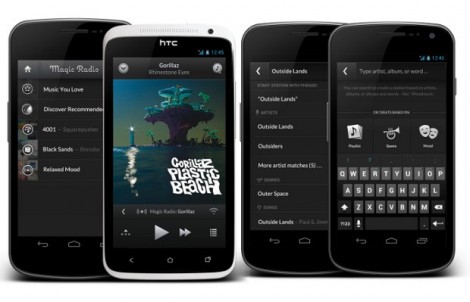 Magic Radio’s big bragging line is that its library of over 13 million songs is 12-times the size of Pandora’s. We couldn’t find any reliable numbers about the current size of that service’s catalog, but at the time of its 2011 IPO there were only 800,000 tracks available, which make’ doubleTwist’s claim seem perfectly reasonable. Unfortunately, in our brief time with the service, its actual discovery tech left something to be desired.

Things worked well enough when punching in the name of an artist or a song (some Mobb Deep in our Wu Tang station, Tom Vek and The Rapture in our LCD Soundsystem one). But the more amorphous “Music You Love” channel refused to serve up anything except R&B from the early aughts, including TLC’s No Scrubs and a deep cut off of Kelis’ Tasty. And this is despite having no R&B at all on this particular device, nonetheless any from that particular time period. The mood-based playlists were just as hit or miss and didn’t seem to take into account our existing music collection or any of our previously played tracks.

Magic Radio is mercifully commercial free (a must in a paid service), but a free ad-supported tier would be much appreciated and would better position it to compete against the likes of Pandora. As it stands, the seven day free trial is just enough to get a taste of the service, but probably not enough to convince those enjoying the fruits of its free competitors to jump ship. Still, if you’re a doubleTwist fan it’s certainly worth checking out. Just be warned that you will be automatically billed once the trial period is up, and its not immediately clear how to cancel your subscription. You’ll actually have to go into the Play store and cancel the service — you’ll find no options in the app itself.