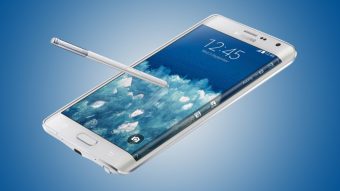 The Note Edge, very much like its predecessor, is a large thin phablet. The screen dimension is of 5.6 inch. Users will also be able to experience the Amoled Quad HD+ on this device. The highest HD resolution of its screen is 524 ppi. The size and weight do not differ much from the Note 4, only that the Note Edge is slightly longer, thinner and lighter by a few grams. Among the features of the Note Edge there are the heart sensor, fingerprint ID sensor and the popular S-Pen which can be slotted to the side.

Screen
The right side of the phablet’s screen curves around its side. This extension is not part of the main screen though. It constitutes of a second screen for other menus and alerts. The smaller screen has a resolution of 2560 x 160 px. The information featured on this screen can be customised.

Software & Processor
The Note Edge’s processor consists of a 2.7 GHz quad-core along with a 3GB RAM. For Operating System, quite surprisingly, rather than the most updated Android version, users will have the Android 4.4.4 KitKat. However, software upgrades might be on the way.

Compared to the Samsung Galaxy Note 4, the Galaxy Note Edge does not offer much of an improvement. The main noticeable feature on the Note Edge is the curved alert panels found on its side. This feature, apart from being aesthetically pleasing, is also genuinely useful. The phablet still does not bear waterproof features, which might be a let-down for the price.