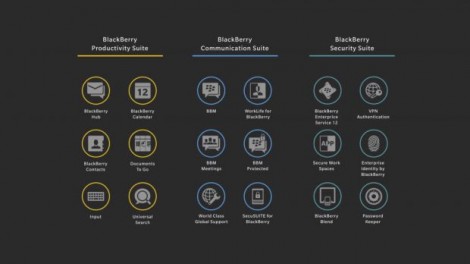 Obviously, BBM is free, but with the recent update announced today, BlackBerry plans to monetize the application by offering subscription-based services like ad removal and custom PINs.

Now the Canadian company is opening another piece of software to users of mobile platforms other than BlackBerry. With the announcement of BlackBerry Experience Suite, the company extends its software solution to other platforms like Android, iOS and Windows Phone.

The BlackBerry Experience Suite will contain three distinct packages of BlackBerry services and solutions, which will be available to users of any of those who use OSes other than BlackBerry.

Three suites that can be sold individually

Let’s start with BlackBerry Productivity Suite, which will allow users to manage work and personal messages, as well as edit document across all devices in a secure manner. This suite also allows users to master their personal and work messages in one place, including email, text, BBM, social accounts.

Last but not least, BlackBerry Security Suite protects users personal and work information from malware and data theft with the company’s secure encryption and privacy controls.

These suites won’t come for free and according to BlackBerry they will be sold individually or together as the BlackBerry Experience Suite.