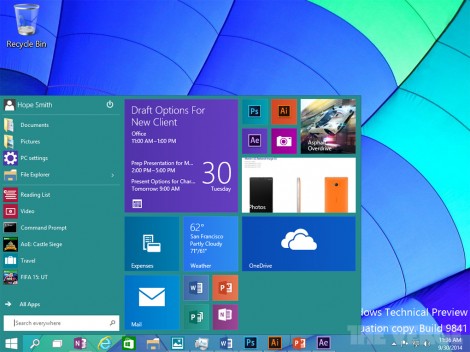 A closer look at Windows 10

Described as Microsoft’s “most comprehensive platform ever,” Windows 10 will offer a tailored experience for all hardware across a single platform family. And developers can build universal apps that will work everywhere. Here’s how Microsoft describes its ambitious goal:

When you put all that together, the end result looks a lot like Windows 7. That’s intentional. Microsoft’s Joe Belfiore pointed to the millions of customers still using Windows 7, and said the company wants to make their transition to Windows 10 much more comfortable than the unfamiliar leap to Windows 8 two years ago. “We want all these Windows 7 users to have the sentiment that yesterday they were driving a first-generation Prius, and now with Windows 10 it’s like a Tesla.”

“Windows 10 will deliver the right experience on the right device at the right time,” said Microsoft’s Terry Myerson. “Windows 10 will run on the broadest types of devices ever.” You can expect a unique user interface depending on what you’re running Windows on; images shown at the event line up with leaks that have surfaced in recent weeks. It’s basically a combination of Windows 7 and 8 that borrows design elements from each of Microsoft’s two most recent operating systems.

The “Metro” start screen and Microsoft’s traditional Start Menu have been combined; no longer is the screen one huge grid of tiles for desktop users. “The tiles and icons that are shown are a blend of classic apps and new universal apps,” Belfiore said. But Live Tiles are still here and can be resized to a user’s preference. More than anything else, Microsoft is working to make everything feel way more cohesive. “In Windows 8 when users launched a modern app, it sort of had a different environment,” Belfiore said. “We don’t want that duality. We want users on PCs with mice and keyboards to have their familiar UI.”

There’s a new universal search in the start menu that pulls in results from the web, and Microsoft is also talking up its “task view,” which helps users master Windows’ multitasking features. It looks fairly similar to Expose in OS X and allows users to set up different desktops for work, home, and other usage scenarios, switching apps between them at will. Up to four apps can now be snapped on screen, which also should ramp up Windows 10’s multitasking power. Microsoft outright admitted this isn’t entirely an earth-shattering addition. But it is intended to speed up your productivity across the entire operating system. “It illustrates for Windows we have to address a breadth of users,” Belfiore said, moving on to show a big improvement to the command prompt: it now supports paste.

But Microsoft isn’t abandoning touch input. Belfiore said the Charms bar from Windows 8 has been carried over to Windows 10 with improvements of its own. “We want to support those Windows 8 users who have touch machines and getting a lot of benefit out of them.” For convertible devices like the Lenovo Yoga 2 Pro, Microsoft is adding a new Continuum mode that aims to make the frequent switch between tablet mode and laptop mode more seamless. “What you get is a device that operates with the simplicity of a tablet, but morphs itself back to the familiar PC experience,” said Belfiore.

Microsoft will launch a Windows 10 “Insider Program” beginning tomorrow, which will give its most enthusiastic and vocal users a chance to try out and help shape the new OS before the general public gets it. Windows 10 will launch to consumers everywhere in late 2015. And today was only the beginning; Microsoft says it will unveil much more about the new consumer features of Windows 10 early next year.