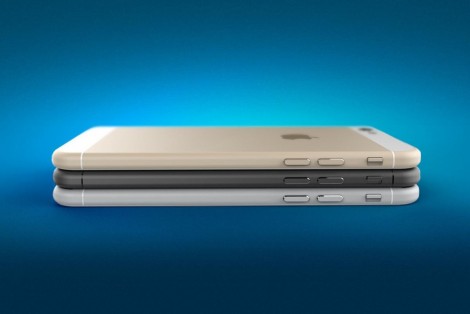 2. Bigger displays made of sapphire

The jury is still out as to whether Apple will be able to produce a sufficient number of sapphire screens in time for the anticipated September 9 launch. However, given the company’s intense focus on the new GT Technologies plant in Mesa, Arizona, we think the iPhone 6 will feature a sapphire display. Several videos have also shown scratch tests on what appears to be a sapphire iPhone 6 screen.

At this point we’ve seen hundreds of photos of the iPhone 6. Components, case manufacturer dummies, and fully assembled iPhone 6s have leaked all over the Internet, alongside reports that the next iPhone will be thinner than ever before and sport a new design.

Based on earlier reports, the iPhone 6 will measure anywhere between 5.5 millimeters thin, to 7.1 millimeters thin. It will be made of aluminum and come in three colors: silver, black, and gold. Most case manufacturer mockups show the power button on the right side of the device for easy access. The volume buttons are still on the left side, but they are slim and rectangular. The home button remains in the same position, though. Recent reports hint that the camera module will stick out from the phone’s body.

4. A8 processor and faster RAM

Apple confirmed that it will hold a September 9 event at 10 a.m. PDT, which it will livestream on its website. Major tech publication Re/Code, the Wall Street Journal, and the New York Times have all independently confirmed that both versions of the iPhone 6 will debut at the event. The iWatch is also expected to make an appearance.

The next iPhone is guaranteed to have iOS 8 onboard. Based on the preview we had of Apple’s latest mobile OS at WWDC 2014, it’s safe to say that iOS 8 won’t have any major design changes, but it will add responsive widgets, better integration with OSX, and a few new app ecosystems. HealthKit, HomeKit, and the new mobile payments systems will be the main highlights of iOS 8 on the iPhone 6.

The iPhone 6 will have a new and improved Touch ID sensor on the home button. Various reports say that the sensor will be more accurate, but look and function the same as before. The iPhone 6 is also expected to have a variety of sensors, including a barometer and air pressure sensor. However, the most highly anticipated addition to the iPhone 6 is NFC technology. Several publications, including the New York Times and Wall Street Journal, have confirmed that Apple will include NFC on the next iPhone. NFC will reportedly be an integral part of Apple’s new mobile payment ecosystem.

Apple will undoubtedly place larger batteries on the two iPhone 6 models to power the larger screens. Reports vary as to the size of each iPhone 6′s battery. In August, a picture of a 2,915mAh battery appeared on Nowhereelse.fr and the publication claimed that it was the battery for the 5.5-inch iPhone 6. In early August, ESM-China analyst Sung Chang Xu issued a report stating that the 4.7-inch iPhone 6 will come with a 2,100mAh battery.

The iPhone 6 will receive an upgrade to its camera, but it’s unknown just how big of an improvement we’ll see. Some reports claim that Apple will bump up the camera’s resolution to 13 megapixels or perhaps 10 megapixels with an f/1.8 aperture.

Release date rumors are all over the place. In late August, a post on Chinese social media site Weibo hinted that the iPhone 6 will arrive in stores on September 19. But a July report from MacRumors suggested that it will hit stores on October 14. At this point, nobody really knows, but we think you’ll be able to buy the iPhone 6 on September 19.

We’ve heard lots of rumors that claim Apple will charge $100 to $200 more for the iPhone 6. The most recent one comes from a Spanish mobile carrier in a report that claims the iPhone 6 models will cost 750 and 950 euros, respectively. However, if Apple does raise the price, we don’t think it will be by more than $50.