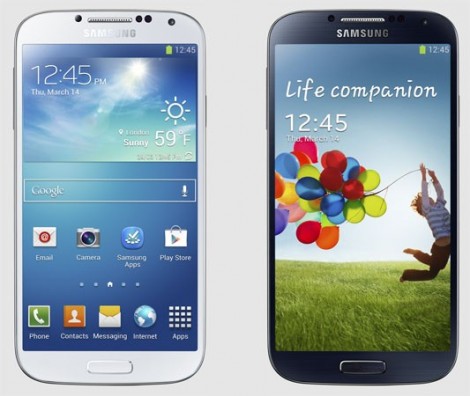 Join our liveblog at Samsung Unpacked where we’re bringing you all of the action as it happens!

Much like the HTC One, the Galaxy S 4 will also offer WiFi 802.11ac support on top of the usual a/b/g/n, and an IR blaster is included for remote control access using Samsung’s WatchON service. NFC, Bluetooth 4.0 + LE are included, and here’s one bit of good news for MHL fans: it’s got MHL 2.0 and is able to use a standard MHL connector (unlike the GS 3, which required a Samsung-branded MHL adapter to work properly).

Moving on to the imaging details, the GS 4 sports a 13MP BSI camera with f/2.2 aperture and autofocus, while the front-facing camera gets a slight bump in res to 2.0MP. Samsung claims that both cameras don’t have any shutter lag, so we’ll be eager to test it out. But some of the most intriguing aspects of the camera are the new features: dual video capture mode, which lets you record video on both cameras simultaneously (much like on the LG Optimus G Pro), and Dual Video Call mode, in which you can make video calls and show the caller what you’re looking at. Additionally, Drama Shot utilizes burst mode to create animated GIFs, while Sound & Shot can record up to nine seconds of audio to accompany a still photo.

The GS 4 will also take advantage of the same “Smart” gesture features we saw on the GS 3, and gives you a few more to enjoy. Smart Pause stops the video you’re watching if your eyes drift away. Smart Scroll will move the screen up or down when you tilt the phone and look at the screen at the same time. Air View lets you use your finger as an S Pen by giving you a preview of an email, calendar appointment, image gallery or video just by hovering your finger over it. There’s also a Group Play feature that connects networks of GS 4 devices (provided they’re in close proximity) to share music in a surround-sound mode or play games against each other.

No pricing has been set, and we’ve been told that the phone will be released globally in Q2. It will come to all four national networks in the US as well as Cricket and US Cellular, and it will be picked up in other markets by Deutsche Telecom, EE, H3G, Orange, Telenor, Telia Sonera, Telefonica, and Vodafone (we imagine this is only a short list of carriers for now, however). The full press release with more details is below, and we also have a full hands-on preview up for your viewing pleasure.